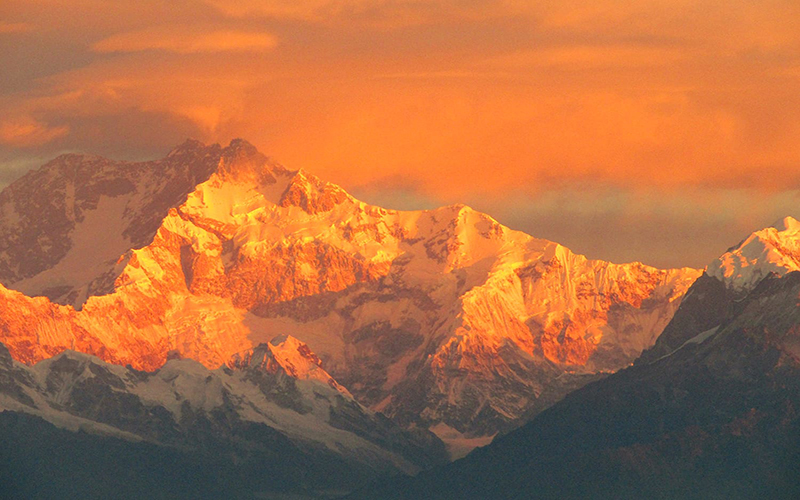 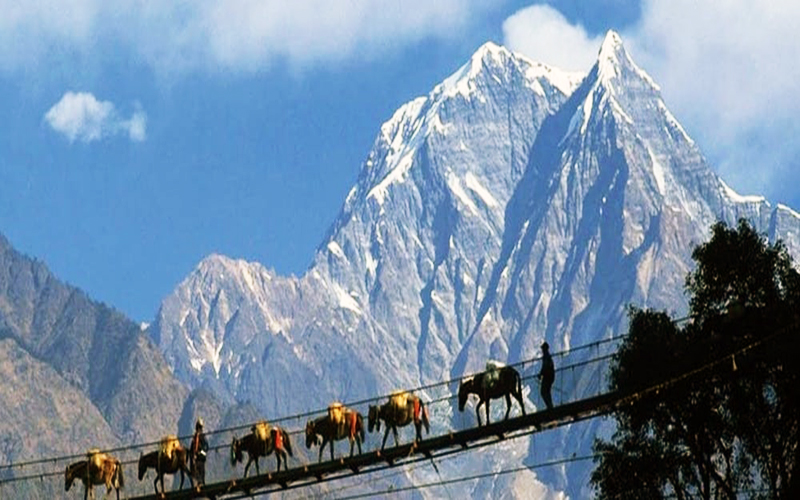 Darjeeling well known as the QUEEN OF HILL STATIONS. Darjeeling conjures visions of snow peaks, serenity of vibrant green hills steeped in splendour, a land of breathtaking beauty crowned by the majestic Himalayas. Darjeeling is one of the most magnificent hill resorts in the world. This heavenly retreat is bathed in hues of every shade. Flaming red rhododendrons, sparkling white magnolias, miles of undulating hillsides covered with emerald green tea bushes, the exotic forests of silver fir - all under the blanket of a brilliant azure sky dappled with specks of clouds,  the crest of Kanchenjunga shining in the first dawn light truly supports the title.

Sikkim’s gigantic mountain walls and steep wooded hillsides, drained by torrential rivers such as the Teesta and the Rangit, are a botanist’s dream. The lower slopes abound in orchids, sprays of cardamom carpet the forest floor, and the land is rich with apple orchards, orange groves and terraced paddy fields (to the Tibetans, this was Denzong, “the land of rice”). At higher altitudes, monsoon mists cling to huge tracts of lichen-covered forests, where countless varieties of rhododendron carpet the hillsides and giant magnolia trees punctuate the deep verdant cover. Higher still, approaching the Tibetan plateau, larch and dwarf rhododendron give way to meadows abundant with gentians.

Travel:  All internal transfers in comfortable by Innova/Xylo SUV cars

Day 1  2nd April 2023 (Sunday)-Arrive at Bagdogra and transfer to Darjeeling:

Welcome to Bagdogra. After collection of baggage we leave for Darjeeling. 3 ½  – 4 hours drive Darjeeling is a paradise for trekkers and  adventure lovers. It is the home of famous Toy Train, Himalayan Mountaineering Institute(established by Tenzing Norgay),Tiger Hill, Ghoom Gompa and Peace Memorial. Places to visit nearby are Mirik,Kurseong, Kalimpong ,Pashupati market and Phalut. Check-in to the hotel. Evening free to stroll around the around Mall, Chowrasta or the Local market  area. Over night stay at Darjeeling. 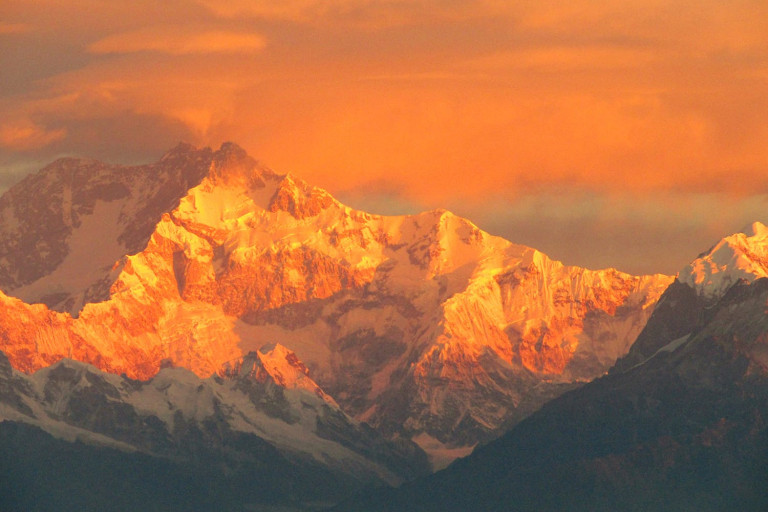 Morning drive from your hotel to Tiger Hill at around 3:45 am.Catch the stunning sight of early rays of sun falling over Mount Kanchenjunga(if the weather is clear.While returning back, a visit to Ghoom Monastery, Peace memorial & Batasia.Back to hotel for breakfast.After breakfast rest for half an hour.Then next round of sightseeing. Full Day city tour of places Padmaja Naidu Zoological Park, Himalayan Mountaineering Institute Ropeway, Tibetan  Refugee Self  Help Center, Beautiful Tea Estate, Natural History Museum , Peace Pagoda. Now head for darjeeling’s famous Toy tarin ride. Enjoy enchanting natural beauty from your train. Back to hotel. Evening free to stroll around the area. Overnight stay at Darjeeling.

Early breakfast and then drive to Pelling 4-5 hours drive from Darjeeling.Check into Hotel. After Lunch we visit Rimbi  water Falls, Rimbi  Rock  Garden, Khecheopalri Lake Kanchenjunga  water Falls,Changey Waterfalls,Sangachoeling monastery,Singhshore Bridge, Pemayangtse  Monastery, Rabdantse ruins, the scenic view from the top of the ruin to the mystic heights of Kanchenjunga ranges is something to be cherished.Overnight stay in Pelling. 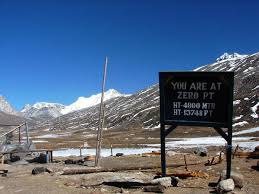 Early morning breakfast and proceed to Lachung.On the way stop and enjoy a few wonderful  locations  like Tashi  Viewpoint, Kabi Lungstok, Naga Waterfalls,  confluence  of Lachen chu  and Lachung  Chu at Chungthang, Twin Waterfalls  and Bhim Nala Waterfalls. Lunch break  will  at Namok ( Extra  Cost ) The roads are colored with full bloom of Primulae, Rhododendrons and many other Alpine flowers guest specially during spring Check into the hotel. Evening free to stroll around the village. Dinner and Overnight stay at Lachung. 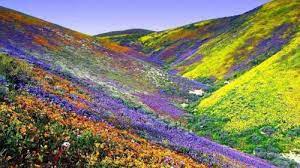 After breakfast  drive towards  Yumthang and Zero Point(subject to weather).On the way we visit  the famous hot  spring which is known for its curative properties of skin diseases. Return to resort at Lachung for Lunch.Back to Gangtok. Enroute stop at Singhik and Mangan. Evening free to roam around M G Road (Mall) or local Shopping center. Over Night stay at Gangtok. Morning breakfast at hotel.Excursion to Tsomgo Lake,Baba Mandir & Nathula Pass.Nathula Pass in Sikkim is the Passage  between India and China and is world famous for the incredible natural beauty of the highway. Tourists need permission to visit this destination of Silk Route. This is around 57 km driving distance from Gangtok and is situated at 4,310m (14,140 ft) altitude. Tsomgo Lake to Nathula Pass is  about 16.6 km driving distance via Jawaharlal Nehru Road.Back to Gangtok. Evening. free to roam around M G Road (Mall) or local Shopping center. Over night stay in Gangtok.(Incase of Landslide or due to any other reasons if Tsomgo Lake is closed then an alternate sightseeing will be provided)

After an early breakfast  & check out. You will be transferred  to Siliguri/Bagdogra Airport (IXB) which is  Nearly 135 km 4 ½ – 5 hours drive.  You are advised to start early and not to rush forwarding Journey. Enjoy your last drive to this beautiful scenic terrain.Reach Bagdogra airport & board your flight with suitcase full of newly created memories.